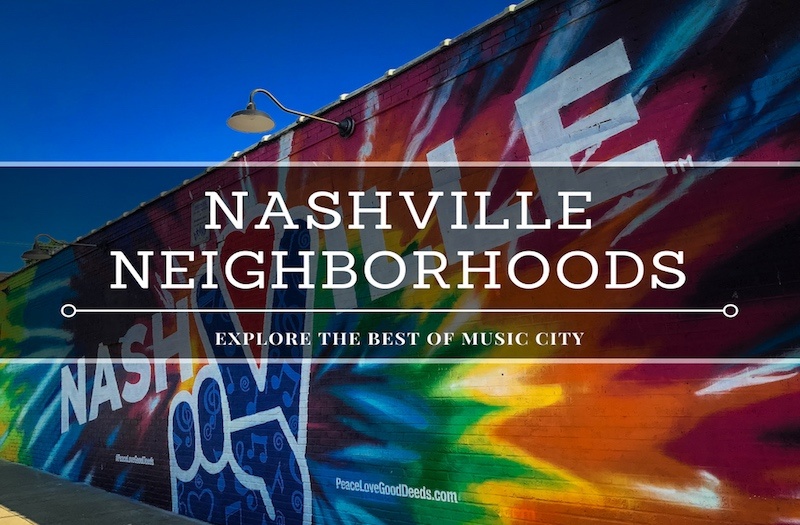 Germantown
A recent facelift has earned Nashville’s oldest neighborhood a spot on the list. Anchored by Werthan Lofts, historic Germantown’s tree-lined roads host a number of new restaurants and multipurpose buildings. Being able to walk to the Farmer’s Market is a bonus but so too is the commute since Downtown is right next door. Neighbors enjoy curated treasures and craft brews at street festivals like Oktoberfest, while upscale eateries like Rolf and Daughters and City House give residents and visitors alike a taste of what Germantown has to offer. historicgermantown.org

East Nashville
What was once considered a rough part of town has very quickly turned into a hot market. First and foremost, it’s one of the city’s final frontiers for truly affordable, single family homes. The area is actually made up of several small mini-hoods like East End, Lockeland Springs, and Historic Edgefield, which might only be a few blocks long and wide. (Within those, realtors can pinpoint the more desirable streets.)

Renovations are happening on just about every block, but most homeowners, especially within Lockeland Springs and East End, can easily find renovated 2,000-square foot cottages on small lots that are landscaped to the edges, making the most of each cozy footprint. Residents here run from creative types in rentals to young families in starter homes, all of whom are finding a tight-knit community and one of Nashville’s fastest-growing food-and-drink scenes. eastnashville.org

The Gulch
Keeping up with the growth in this section of town is about as easy as stopping a high-speed train: It’s fast, furious and constantly on the move. High-rise condos inside the Icon and Pine Street Flats are now being trumped by large apartment dwellings being built to serve those living in town on a limited basis, or just needing a plush crash pad for entertaining.

The convenience is unparalleled, with the growth of dining, retail, and entertainment venues keeping pace with the housing market. Residents range from the city’s most respected downtown attorneys to advertising agency execs who might be using their luxe Terrazzo condos as a work-life combo space. Prices are high, but the time saved in escaping traffic is worth the investment. There's even a great grocery store on the corner.
explorethegulch.com

Brentwood
Once considered home to the 'Brentwood box,” this south-of-the-city enclave still offers big sprawling homes but has evolved to include gated communities with smaller-property footprints. Larger families or anyone seeking quality public education tend to flock here for the schools as well as premium golf, recreation, and shopping within a few miles.

There are endless retail options in Cool Springs and a number of medical and service businesses in and around Maryland Farms, meaning convenient access for those living a busy lifestyle.

Sylvan Park
The resurgence of this neighborhood shows no signs of slowing as new buyers are finding endless remodeling opportunities (read: there’s construction and renovation on almost every block). Located between the ever-improving Charlotte Pike and West End Avenue, this area is tops for convenience to downtown. Close to hospitals, good schools, and easy access to I-40 and I-440, it also boasts a lineup of fun, family friendly restaurants (McCabe Pub, Local Taco, Caffé Nonna) and one of the city’s most well-appointed community centers. Sylvan residents take pride in their state-named streets, which are usually bustling with runners and walkers on their way to the convenient trails of the greenway or for a round at the McCabe Golf Course. sylvanpark.blogspot.com

The historic neighborhood of Old Hickory has been called Nashville’s “best kept secret,” but it was anything but secret when it was built many years ago. In January 1918, as the “Great War” raged in Europe, the U.S. government contracted with the E.I. DuPont deNemours Co. to build the world’s largest gunpowder plant on 5,600 acres in the hairpin turn of the Cumberland River known as Hadley’s Bend. By the time the war ended on Nov. 11 – barely 10 months later – more than 3,800 buildings had been constructed, with housing for 35,000 people. What had been an ordinary rural section now became well-planned city. Here was everything that could be found in a modern town, post office, theaters, churches, a bank, fire department, a good sewerage system, Y.M.C.A. other buildings and schoolhouses.

The end of the war meant there was no longer any reason for Old Hickory to exist. By 1920, Old Hickory was a virtual ghost town. A group of investors called Nashville Industrial Corp. bought Old Hickory from the government and after selling off much of the plant’s equipment, sold the town and plant to the DuPont Co. in 1923. DuPont built many more homes over the next decade, using the same basic floor plans it had used as the government’s contractor on the original construction. DuPont maintained Old Hickory as a company town, repairing and renovating the homes on a regular basis, for the next quarter-century. In the late 1940s, as company towns fell out of corporate favor, DuPont sold hundreds of the Old Hickory houses to the employees who had been renting them. Hundreds of other “temporary” houses, most of them then 30 years old, were razed.

Today the Village of Old Hickory still stands in the shadow of the DuPont Plant, which continues to employ several hundred employees. The American spirit of the community thrives with historic homes, local shops, charming meat and three, a hip coffee house and a beautiful marina. Come spend a day at the beach area or walking the trails near Old Hickory Dam. Just like in the 1920s, the factory town look and feel remains but it’s the wonderful people that makes the Historic Old Hickory Village home.